That bar is 38 Degrees Ale House in Alhambra, CA.  Their names from left to right: Wee Smokey Amber Ale, Saison Noir, and Ohana Blonde.  Ohana Brewing Company presented these gorgeous winter seasonals with yummy food pairings provided by 38 Degrees on Sunday, January 19.  The event was a great way to introduce Ohana’s soon-to-be tasting room, located just around the corner from 38 Degrees, with a tour and a brief history about their brews, their goals, and hopes for this new venture.

Other speakers included 38 Degrees co-owner Clay Harding, a self-proclaimed “Hop Head” from the age of 16, and members of The Full Pint, a resourceful blog with news, reviews, and interviews. 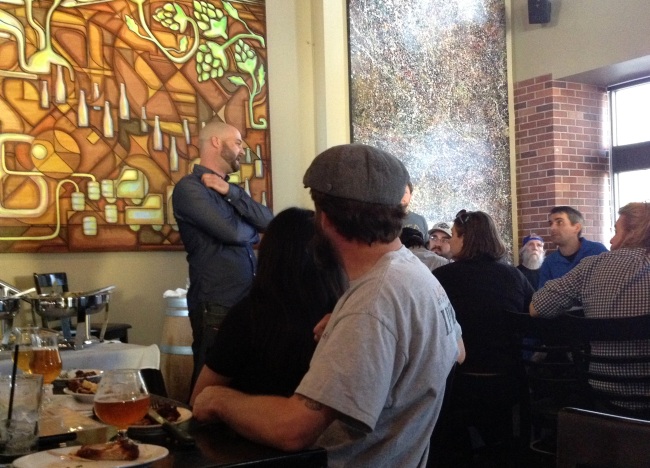 Featured above:  Clay Harding speaking about being influenced by his step-father, who co-owned Crown City Brewing since the 80’s, and the future of 38 Degrees.  Look out for a “1st annual festival” being planned for March of this year.

Featured above: Members of The Full Pint speaking about the early days of the blog:  “We presented ourselves as big shots to breweries that didn’t know any better.”

Featured above: members of Ohana Brewing speaking about the tastings offered and their upcoming tasting room in Alhambra.  They are still deciding whether to use can or bottles, and although the space is currently empty with only lines of tape signaling where the bar will be, you can expect a great experience.  They hope to make more barrels than last year, which was between 400-500 in 2013, but still less than 1,000.  The Ohana tasting room is expected to open March 2014.

Can we talk about this guy’s awesome shirt now?!